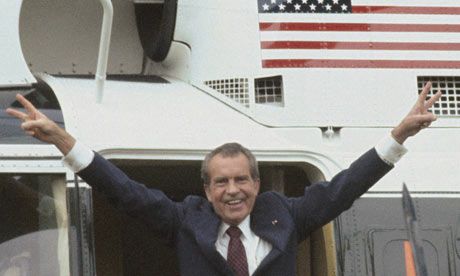 Didn’t vote for him in ’72,
thought everything about him C.R.E.E.P.y.
Bet you’d cast yours for Humphrey, wouldn’t you?
Especially with Agnew as VP.

But Dick got his Milhous caught in a door,
starting with the botched Watergate break-in.
The dirtiest of dirty tricks galore,
Step One in a demise of his own makin’.

I love it when pols go around thinking
they’re the smartest boy in any room they enter.
In this case it left ol’ Dick a’drinking,
his paranoia pushed front and center.

They say that Pride goeth before the fall
as slaves warned winning generals Roman.
Dick thought his powers were greatest of all,
’til Congress and the Courts left him moanin’.

Now I’m not one to be pointing fingers,
since I can’t cast even the thousandth stone,
but them what think their stink don’t lingers
may soon look around and find they’re alone.

Again, I’m not casting any aspersions,
but I believe I can tell wrong from right.
Seen my share of political excursions
to the dark side, where people lose sight.

Someone said something about history
and how not knowing it you could repeat it.
But that’s really not any mystery,
unless you’re too self-absorbed to heed it.

I guess there’s a moral somewhere in here,
about crooks and hubris not mixin’.
But if the shoe fits, I hope that it’s clear
history shows you could end up like Nixon.

This bit of rhyme was prompted by a call for a “name” poem. This was the second name to come to mind. Too many people still have not heeded George Santayana’s advice, I fear. And yes, you probably had to be there in ’72 (or seen/read “All the President’s Men”) to know what C.R.E.E.P. was. But for the rest of this piece? Nahhhh…