You and I are no strangers
to the inevitability of Loss.
We’ve held its hand together.
Like a shadow, it has clung to us,
darkened the paths before us,
dogged our steps, for all our days.
And then come the nights,
the nights when all is shadow,
and Loss lies next to you in bed,
cold and silent, stealing your rest
with tossed elbows and hogged covers.
You have lost something you cherished
and are now bereft of that
to which you gave your heart
but received a heart in kind.
I lost something I never had,
though my heart cherished nonetheless.
You lost your Love. I lost my Hope.
You still have that heart to hold.
I have shivering shadow and
a tangle of covers where I always
hoped a heart would be.

Table for one, that’s what I get
Since we no longer talk, and yet
I’m not alone like other men
Might be in bar, cafe or den,
Since here you see the place I’ve set.

That’s no surprise to you I’ll bet,
Knowing how I would sit and fret,
Even at this lonely, this Zen
Table for one.

Sure, there have been others I’ve met,
whom places in my life I let.
But only you are with me when
My obsession cries through this pen.
Two ink stains we’ll leave at this wet
Table for one.

The fantasy always
exceeded the reality,
until the reality
brought so much pain.
It is an inevitability
in my existence that joy
is more often make-believe,
a wish, a what-if,
while suffering is real,
even if only imagined.
What is fantasy if not
the yearn, the ache,
for that which we wish
to feel, if only
to make the pain stop?
You know this, though,
since you’ve been the fantasy,
you’ve brought the pain,
you’ve dreamed the joy,
yet came to learn as I did
that anguish was always
just an opened eye away.

Back to the métier – dreams and hope, loss and pain.

It looks, from this warrior’s level,
as if the battle finally has ended.
Upon this field, once-sustaining empty vessels,
as well as worn, broken and crumpled weapons
lie strewn from edge to edge,
foreground to horizon.
More still have fallen out of his sight.
Dreams, hopes, plans, idle inspiration,
they hover above the expanse
like a morbid miasma, like the fog of war,
like the spirits of the dead.
Over there he seee the pictures
of the warrior’s children, forever young,
He thinks, “This is what defeat looks like.”
And yet, as you can see, he’s won the battle.
This time.

The bottles can be returned,
the cups, pencils, paper replenished
and with them this warrior’s resolve.
Pyrrhus will live to fight another day.
He is Homer, he is Herodotus.
Or perhaps he is Caesar, writing
his own history of battles joined,
won, lost, best forgotten.
He knows the end could come tomorrow,
but that same tomorrow he’ll engage
the enemy once more, fighting
with himself on this 4′ x 2′ battlefield
for what makes him feel most alive
and keeps one day’s words forever young. 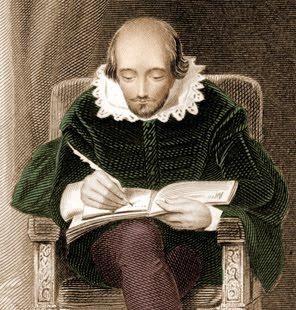 The rhyming poet his words moves around,
even though no one ever talks that way.
It’s more important to match that end sound
than put a verbal horse before the dray.

Sure, the rhymer throws words no one uses.
Great you’ve got vocabulary to burn.
Though he may try accepted abuses,
like slant rhymes and language kinda “fureign.”

Lately, I can’t conjure story or verse,
a condition I still fight more than fear.
Since I have no muse to help break this curse,
I’ll play this game to get my ass in gear.

I’ve a Shakespeare costume, and I don it.
then strut and fret on this page…my sonnet.

Within, the emptiness rules, cold and dark.
It’s been this way how long I just can’t say.
Probably long as I’ve not raised a spark,
in here to warm and light another day.

I’ve given up groping my way around,
gave up about almost all I once did
once upon a time, like new stories sound.
Now new stories have run away and hid.

You’d think I’d hear old echoes in this space
where once so many voices talked to me.
I can’t bear to listen, in any case,
lest your voice I hear and dreamed-up you see.

It’s new dreams I need, to fill up my mind,
not blank memories of this life left behind.

I look up to see
the rain come down,
and look down to see
its drops splash toward sky.
I look through the light
to see the shadow,
and through the dark
for any light to catch my eye.

I must be warm in order to
best feel the cold
and feel relatively cooler
to sense the warm.
And so it goes,
living in a world
where we compare and contrast
to judge this life’s form.

There would be no bad
if not for good;
and no silence
without the sound.
Just like I’d not be here
except for you, and you’d
never grace this place if not
for the me to you I’m bound.

Just a little something I tossed at the page to kid myself I’m still writing.
Nah, I think I’m just flipping verbal spaghetti at this virtual refrigerator door.

The “excuse-me” mist drops
like a ghost rain blurring
the windows. But,
there are no windows.
I stand here and let it
touch my face, soft and cold,
when instead I’d prefer
your touch, once soft and warm.
But that won’t be today.
It’s probably just my imagination
feeling something not really real.
Like there ever really was a you,
or there ever really has been a me.
Perhaps I’m just another
“excuse-me” drifting and bumping
my way through the tiny drops
of time. But, excuse me if
I still envision, blurrily through
misted eyes, a ghost us.

She’s not sure even she knows
Why she thinks of him still.
And she just can’t stop it,
Even though she’s tried not thinking at all.

Why she thinks of him still.
She’ll only whisper in the dark.
Even though she’s tried not thinking at all,
It’s his voice she hears there beside her.

She’ll only whisper in the dark.
What she never admitted out loud.
It’s his voice she hears there beside her.
Whispering what she wished he’d said.

What she never admitted out loud,
She’s not sure even she knows.
Whispering what she wished he’d said,
And she just can’t stop it.

An old friend suggested I join her and some of her other friends in creating a special form of poem called a pantoum. It is built on four-line stanzas that repeat certain lines that occurred earlier in the poem. In my present state of creative malaise (AKA paralysis), I thought it would tear my brain in two. But I tried and all it tore was my heart.