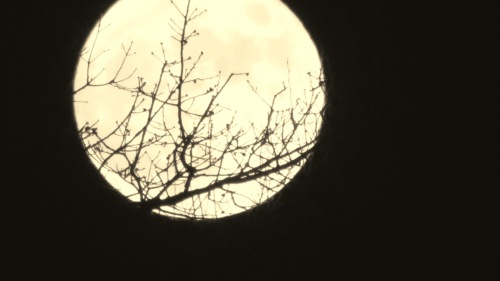 Did we really once move
through the night,
our shadows holding hands
beneath a moon that could
read my mind the way I wished
I could intuit yours?
In those moonlit hours,
it cast shadows so dense
I tripped and fell over yours.
Its beams would cut ‘round you
like a silhouette artist
leaving me these shadowy memories.
We stand alone in the night,
eclipsing lunar light beneath
its face, once-radiant as yours.
Your face, how it gleamed
like alabaster, projecting
its own glow to my glib sincerity
and welcomed lies I always knew
could be final goodbyes.
Perhaps there will come
another tomorrow night when
these clouds will roll away
and the moon, in all your glory,
will extend its searchlight fingers
to fumble and find the missing
you never missed, the supine echo
of a man painted in light, and
a shadow of what he never heard.

And I’m forced back to rhymes
just like all those other times,
especially the most recent,
not like back when I was a decent
poet, one full of emotion,
but, like you, that ship’s sailed on an ocean
so rough, tough and wide
that now that ship’s sunk, like my pride,
and I no longer hide
what I feel inside
‘cause I admit I cried
so many times about the losses,
more than all the knots and crosses
I would write for you,
even though they could never be true.

Anyway, I guess here’s the drop,
I’d love to write something besides this glop,
but I can’t without a target
and that’s something no market
stocks, like bras, panties and socks.
See, there’s that sub rosa sex
you say I hide within my subtext.
I had to look up that definition
since idiot savant is my position
in a world so full of real writers,
the love igniters,
the fascist fighters,
who pull all those all-nighters
with real muses providing invention
while I fail without your kind attention.

I know, it’s sounds so damn dumb
to think one person can strike me mum.
But that’s really not true,
because there’s always been more of you
than meets a reader’s eye,
even one who will so closely spy
for what you find between the lines,
as if I was some teen who sits and pines
then struts his hour upon the stage,
or like an old loser who bangs bourbon for rage
but mostly I’m just the guy on the page
who longs to express simple, not sage,
somethings, my second toughest critic,
the one who’d always be so analytic,
as to gauge each poem’s level of misery
when really there’s no mystery
to what I used to do.
I just wrote them for,
not about, but more
like at,
you.

Yeah, I watched too much “Hamilton” this past weekend. So now I’m spitting rhymes in an effort to write anything at all. But maybe there’s something in here I don’t see. So if you do, and if it’s not too painful (I don’t bite and I’m too old and tired to care), let me know you’re there. Shit, another rhyme.

Wistful thinking,
blissful blinking,
ignorant blissing,
like promiscuous kissing,
brings infectious diseasing
and needless deceasing.
So you do you, Tovarishch,
but right now there’s no bar which,
to the sound of glasses clinking,
you can do any wishful drinking.

So what shall we do
to survive, me and you?
Keeping hope and us alive
is a goal for which I strive.
But is it too much a task
won by merely donning a mask,
or cooping down in my cellar
keeping you distant from this feller?
I pray one day we’ll touch again,
I have no idea where or when,
but just like all the other lonely men
I live to make it to that unknown “then.”

I’m so down and F’d up by these days of sickness and strife, I can’t rub two words together that have any meaning. Not even, and most especially, to me. But if I don’t even try to do what somebody put me on earth to do, why bother leaving the basement for light and air? So here you are. One hundred or so unmasked words infecting one another and me. Now excuse me while I check the furnace filter again for the third time today.

Rabbit’s a patient boy, who cares not
that it’s Saturday as he hunkers
beneath the porch next door
until the rain lets up.
Cats or coyotes around here
eschew attacking rabbits in the rain
unless they’re starving. Otherwise,
it’d be cruel, and cruelty’s not Nature’s game.
That’s the domain of the allegedly
dominant creature of the planet,
the silly species that will put up with,
hell stand out in the middle of,
the storm as long as they can
stuff their mouths and
fluff their nests with more clover?

But rabbit doesn’t know this,
nor does he care. This rainy Saturday’s
just another “whatever” rabbits
discern as days. I doubt if he understands
it’ll be dark later. Or that the light
will return on that thing we call tomorrow.
Rabbit just cares that he’s
out of the rain and he’s sitting
in a salad bowl full of clover and his buddy
the robin just plopped next to him.
And, as I sit here in the house, I whisper
“Thanks, Rabbit,” for the momentary shelter
he’s given me today. I pray someday
my storms will let up, too.

Ya know? Sometimes Nature will get up on its hind legs, reach out a paw or wing and save me from myself and the storms besetting me. If only for the time I can write about those rabbits, robins and their rainstorms.

For years and years
and years and years
I’ve chronicled the echoes
of my woes and yours,
I’ve given voice to
the oohs and ahhhs,
the sniffs and sobs,
I hear with an ear
no one can see.
But I’m tired.
Tired, tired, tired,
retired and re-retired.
I know there’s joy out there
because I can hear
the giggles of little ones,
see the smiles of those
who think they know love
in this moment when I sense
I’m going deaf, blind and,
perhaps, speechless.
Yet there’s hope in this
canyon of our echoes…
because at least
I can still feel.

I wish I could find the recipe
for my old delectations you loved.
Couple of cups of flower
for the nature ones,
a teaspoon of that sugar and soda
for the leavening of levity.
Was it four or five drops
from the bottle of tears
for all the pearl-clutchers?

Seems so long since I
broke all those lines of eggs
and shoved a two-verse bit
of two-bit verse into the oven.
Was it a knife or a toothpick
I’d stab into the Westerns
to check their done-ness?
None ever were.

I should have written down
those old recipes, but maybe
it was the total sensory emptiness
of the cold, aroma-less kitchen
that stirred me to pull out
this 52-key mixing bowl again.
The clicks as I mixed this
sound write, but I’m never
sure how how it’ll taste.
Want to lick the spoon?

Here you are again,
sitting, standing,
floating in front of me.
There but not there,
inevitably as real
as I can make you.
And yet I’m your captive,
one of my own imagination,
one who who lives to see you
and loves to please you,
one who chronicles
the never-weres in clicks
of never-wills,
one who almost never can
without you.
Then I realize it’s time
for you to go again,
fading into the light.
At least until tonight,
when you return, floating
on a river of blackest ink
across my ceiling dark.
And I, your poet, without a pen.

I wonder and wander each day at this time,
hoping I won’t need to resort to some rhyme
to chronicle the tour from right brain to left.
Sometimes the scenes are forests or plains wind-swept,
others like deserts, barren of even sounds.
But the best trips are those where I, spelunker
of this cavern, drop into my heart’s abyss
or maybe the bottomless black of your eyes.
I guess that’s because I don’t see as much as feel
my way into these chambers of mystery
where I’m sure there are glyphs of our history
on the walls that echo each heartbeat and blink.
So if, while you read, a tear on your cheek falls,
it’s just irritating me trying to feel
with hands and heart, my way out, along those walls,
imprinting memories I hope I don’t drop
before my wander is done, when I’ll wonder
not how I found my way, but how I lost it.

Are you still feeling that pain
you’ve looked for me to capture
in a weir of words
strung across your river of tears?
It’s a difficult thing,
to weave a net for another’s suffering,
since each of us carries
our own sorrows, denizens of
the murky bottom, slithering through
the broken hearts of my words
and the knottiness of your needs.
And so I fail, not for lack of trying
or even for misunderstanding, since loss
is as much my tool as this clickity keyboard
and this clackity metaphor.

Today’s one of those bright days,
one in which I wade through the shallows,
picking at the small miseries
that beset us all. Then, with a splash,
the great sorrow leaps over
my words, headed upstream.
And I know. I’ll never capture
what’s allowed to return and spawn.
In that, though, I find a beautiful solace,
like a rainbow after the storm.

If you could hear my voice,
would you know who I am?
If you could see only my eyes,
would you just shrug and move on?
You, who notice so much, how would
I stand or walk or scratch
my nose that’d signal I’m
the one standing before you?

I only ask because years and tears
take their tolls, and to chase life,
we now wear masks to jump the stiles.
Would I recognize you, if you
covered half your face?
Your smile, once so infectious,
would retain some anonymity
and protection from me, though
your laugh might break through
as if shrouded only by Salome’s
diaphanous veils.

Would I recognize those pools
of sadness or of anger cascading
over your protective wall, as well
as your mask? It doesn’t matter.
Apart is our part in how life goes on,
and happy face to face need only
happen where there are no masks
and distance is dissolved in time
and the dark mask-drop of dreams.